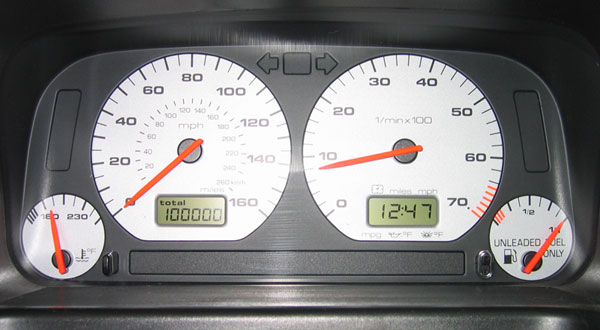 I’ve had my Cabrio for eleven and a half years, and up until recently, the odometer had only 5 digit numbers displayed. Seems like it took forever to reach the 100K milestone, but it finally happened on April 20, 2008 in Iowa City, Iowa.

What was I doing in Iowa City? I had stopped by to visit my college friend, Sarah, as I was driving from North Dakota to Pennsylvania. It was a good three-day trip, totaling 1925 miles. I had my cat with me and she did exceptionally well. Of course, so did the car. :)

Trading in the Passat for the Eos

I had a love-hate relationship with my Passat W8. I loved the idea of the car: the big engine, the four-wheel drive, the color, the size. But I always felt like an imposter in that car, as I’m not really a sedan/big car person. And while the car never let me down, it had issues and it was a magnet for getting hit and badly scratched.

For some time I’ve been talking about getting rid of it for something new or old, and I just couldn’t figure out what. The Audis are nice, but overpriced. I couldn’t see spending so much on a Porsche. Even if it comes to the U.S., the new Scirocco doesn’t look like my kind of car. And finding well-kept, older (early-mid 90’s) VWs is getting more and more difficult.

The Eos has appealed to me since I first saw it at the L.A. Auto Show a few years back, but I didn’t want any vehicle usurping my Cabrio. However, now that I have cars at opposite ends of the country, there wasn’t any chance of that happening. Plus a convertible in the Bay Area is a nice thing to have. The only question was which engine?

Ultimately, the engine question was resolved by the transmission question. After test-driving both the 6-cylinder automatic and the 4-cylinder turbo manual, I went with the latter. I think that automatics are just boring, and maybe that’s what frustrated me about the Passat — I never felt like I was having the amount of fun that I could be having. Plus there are kits to get the 4-cylinder turbo from 200hp to over 240hp, so I have options if I find the car underpowered. (So far, I haven’t.)

So, here she is… my new Eos, as of yet unnamed — though I have a feeling that Duran Duran’s Red Carpet Massacre influenced my choice of color and I may end up with a car name like “Rio” or something… 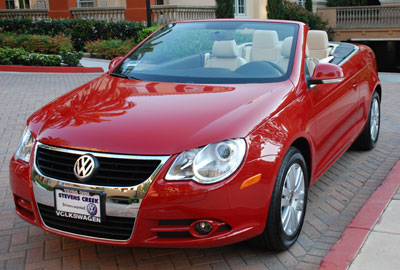 One to many O2 Sensor Failures?

Ever since I got my first Cabrio, back in the summer of 1996, I’ve had troubles with O2 sensors failing. It’s a common problem — everyone I know has run into this. Once a year, or at least every other year, you pump $50 or so into a new sensor and you’re good to go.

Except a few years ago I started replacing them with every inspection or tune-up. Then the VAG tool was always reporting O2 sensor problems, even when I had a new sensor installed. A few mechanics dismissed it, just telling me to drive the car more often. I was worried, but the car still ran, so I kept driving.

But then, over the summer, I started running into a problem — the engine started “choking”. It seemed like every time I hit about 3500 RPMs in first or second gear, the engine would cut out on me — pushing in the clutch would usually let it recover, but I couldn’t get into third gear, which means I wasn’t going very far. Of course, the VAG tool kept reporting O2 sensor failure, so I took the car over to the local mechanic and told him what was going on.

“Sounds like the mass air flow sensor to me,” said Gene. There’s no diagnostic that can be run on that sensor though, but with years of experience like Gene’s, I was willing to trust him and pay for the replacement. Sure enough, the new mass air flow sensor went in, and all of the O2 sensor failures disappeared. No more engine choking, the purr of the engine sounded much better, the exhaust was cleaner, and my car and I went zooming along like we haven’t in a long time.

So if you’ve had a few too many O2 sensor failures lately, you might want to look into replacing that mass air flow sensor.

It’s true… tomorrow will be my car’s 10th birthday! Tonight I’ll be celebrating with cake in a streamer-decorated garage, and tomorrow my car gets all new moulding. Woo hoo!

It’s been a long while since I last updated this site… this place has been an internet graveyard! So a quick redesign and some content updates are just to freshen things up. Kick my butt (virtually, of course) if you don’t see me making more updates moving forward!

In car news, I moved back to Pennsylvania last year! The Cabrio has new plates, of course: VR6 PWRD. Wave if you see me!

Posted in Updates | Comments Off on Update